Hello everyone, thank you for finding my blog if you’re new here. I’m Stephanie I have Ehlers-Danlos syndrome and I have a history of tongue cancer which was treated successfully but unfortunately left me with several legacies. I have a feeding tube and I have have issues swallowing speaking. I also have a funky sounding husky voice that said I haven’t got cancer so every cloud….right?!!!

A few weeks ago, it was a Tuesday I was being very organised and we’re looking at changing the children’s bedrooms around the bed so I took some photos of things I was selling. I’ll put them on Facebook and all that malarkey….

I woke up.. at the bottom of the stairs and I quickly realised that I’d fallen down the stairs so tried to stand up. That didn’t work, so I ended up crawling to the kitchen because there was a chair in the kitchen for some reason. I sat on the chair and texted my husband…

“don’t suppose you’re free are you? Could you pop home for 5 minutes

He didn’t answer particularly quickly so I decided to call him and just say “can you come home” very calmly and collectedly. He was here within minutes and had one look at me and said “we are going to A n E”… apparently I had a massive egg on my eyebrow and lump on my cheek and the side of my face was very very swollen. I refused and suggested we’d go to the GP and we get there and I seen so quickly. And they were awesome…but by this time I was acting odd and wasn’t making much sense…weirdly I remember very little about this. They decided an ambulance was needed to take me to the hospital.

Now I don’t remember going to the hospital by ambulance or the actual ambulance arriving…just bits and bob’s….I was super tired though…. sooooo tired. After 24 hours on a trolley (not a bed, just a hard trolley) in a corridor I was taken to ward 2 and they were great.

I had scans and x-rays but all was well – just bruising withlots of pulled/strained muscles and a banged up fed up face…. it seriously looks like I’ve asked a 5 year old to do some winged eyeliner and a cut crease on me. Here are some pictures from the last few days… 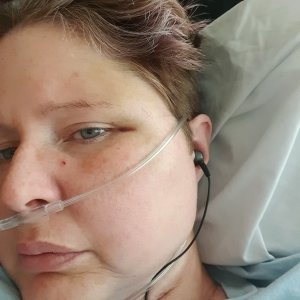 Look how swollen my face was….. I look like a hamster after a big meal lol!

Then the bruising kept growing lol! 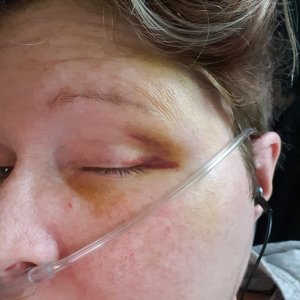 But I’m home and hubby is home this week too as I’m still a bit out of it….forgetting words and being clumsy…apparently its concussion.

I’m such a tit…. I probably tripped over thin air lol.

I’m so so lucky to have such great health care. I remember in particular a nurse who was so so kind, she was holding various cold packs on my head and practically hugging me. She’s such a beautiful person.

Anyway I’m much better (the concussion took it’s time to pass but I’m back!).

Im a military wife and mother to 2 beautiful children D my little girl who is now 5 and K my boy is 10.. I was diagnosed with tongue cancer 13th Feb 2013. I needed a major operation, and radical radiotherapy. I have been am unable to eat since my surgery and am fed by a PEG tube. But most importantly I am still smiling.xx View all posts by mycancerandme

This site uses Akismet to reduce spam. Learn how your comment data is processed.